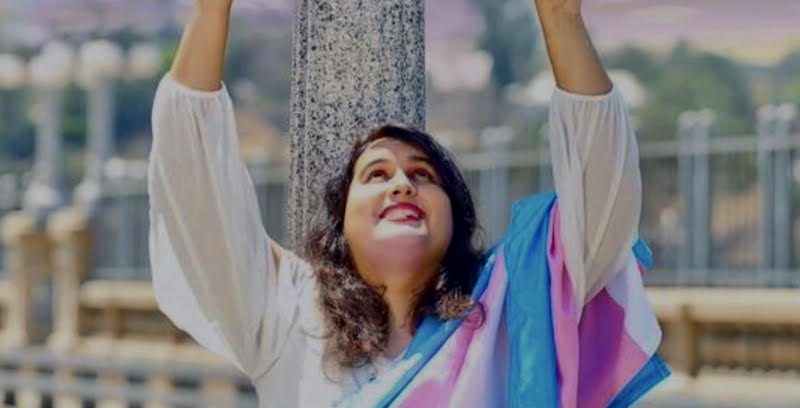 This week, Gay Desert Guide’s Woman Crush Wednesday is Paulina Angel from Trans Community Project! Gay Desert Guide’s Jeff Denean Jones interviewed Paulina on Wednesday. The discussion ranged from Defining a New Normal for Oneself, a lifelong passion for music, and the necessity for activism in today’s society.

GDG: Did you grow up in the Coachella Valley?
PAULINA: Yes, I was born at what was then known as the Indio Community Hospital in 1982 before it became John F Kennedy Memorial. I’m a 3rd generation Coachella Valley resident, my grandparents settled here as the valley was growing. I’m proud to be from the city that brings you the amazing Coachella music festival.

GDG: As an effect of the COVID pandemic, most folks had to adapt to the so-called, “new normal.” What is the “new normal” from your perspective?
PAULINA: I feel that the new normal is actually being more health conscious than what our attitudes were at previously, it’s about making sure you are not only healthy physically, but healthy mentally and spiritually. For me, I was always like that, never taking all aspects of my health for granted. In spite of the hardships caused by the pandemic, has anything positive come from this experience that you are grateful for? I like to think that it gave me an opportunity to not only check in with myself health wise, but also focus on my first love which is music, so since ‘Rockdown’ as us musicians call it, I’ve been finding myself writing new songs, working on old ones and recording new stuff that I would post a lot on my Instagram (@pmimusicgroup), at the same time really spending time with my family.

GDG: You have a great passion for music. You have performed songs from the Beatles, and you are a fan of Pet Shop Boys! That is an indication that you have great taste in music! Do you have some musical favorites that might surprise me? Like, Quiet Riot or something like that? What has music meant to you in your lifetime?
PAULINA: If you’re a songwriter like me, as well as a musician, you strive for eclecticism in music, so sometimes I put together these playlist of songs that I like that are very schizophrenic, so I’ll listen to Kylie Minogue, Buddy Holly, H.I.M., Le Tigre, Tegan and Sara, Partridge Family, Peaches, The Beach Boys. One look at my Record and CD collection, you’ll be like ‘Dang!’. Music is everything to me, I don’t think I would have been born if it weren’t for the love of music my dad has. I’m also third or fourth generation musician, so music is in my DNA. I don’t think I could ever go a day without playing music, whether if that’s on guitar, bass or piano, or putting something on my turntable.

GDG: I understand Trans Community Project – the nonprofit you’re leading – will forgo the physical Transgender Day of Visibility event this year due to the continued concerns with large social gatherings and the spread of COVID-19. Instead, the LGBTQ Center of the Desert is hosting a virtual event for this important call to action day of transgender visibility. What is planned for the event?
PAULINA: On Tuesday March 30th at 5pm, We will be showing an amazing documentary via Zoom called AIDS DIVA, which is about the life of one of our first activist in our community, Connie Norman. So we will be viewing the film, and do a Q&A panel afterwards with myself, community activist Diana Olivia Feliz, president of LKAPS.org David Kelly, and film director Dante Alencastre. Go to the The LGBTQ Community Center of the Desert’s Facebook page to view the event for more details on how you can register to attend.

GDG: As you know, it’s been a pretty hard year for many reasons for the great majority of Americans. That said, it is still harder for marginalized communities, communities of color, as well as LGBTQ communities. Our transgender friends and family unfortunately were subjected to unfair and disturbing politicization from the absurd patriarchy’s extreme ideologues and women named Karen. The LGBTQ community is best when facing challenges brought on by “old thinking” in our society that still cast us as “different” and undeserving of equal protection under the law… a privilege heterosexual white Americans would take for granted and many – it would seem – prefer not to share. Activism has become something most of us have become quite accustomed to, due to the scale of struggle marginalized groups face in America just to be equal. How has activism played a role in your life?
PAULINA: That’s a really great question. All my life, I thought of myself as a One Trick Pony, and only thought that music would be the only thing that I’ll be great at, which to me, I wouldn’t mind, music is life and the world’s universal language. Activism gave me a chance to not only see if I can do something different in my life, but I love the idea of doing my part to make society better for future generations. I didn’t realize what I was doing was activism until one day in 2011, the then Vice President of the Student Senate for California Community Colleges in Sacramento called me an Activist. I thought you had to be someone special to be called an Activist, and I was and still am this poor trans woman of color from the Coachella Valley who is a musician. When I was 5, all I wanted to be was Paul McCartney, ; but a friend of mine told me ‘well you can be a Rock Star for the LGBTQ Community’. I think that what activism did for me was giving myself an alternate way to have a voice, at the same time boost my self esteem. As a cherry on top, it gave me an opportunity to go to places like Seattle, San Francisco, Sacramento and Washington DC, which are places I never thought I’ll be able to visit, but visited to teach others on how to become effective activists and leaders for their communities, my way to pay it forward.

GDG: What is your favorite song to perform, and why?
PAULINA: Back In The USSR by The Beatles, that was the first song by The Beatles that I heard when I was 5 years old, and thus became the tune that started my musical journey that I’m still on today.
Thank you so much, Paulina, for the great conversation and sharing your wisdom and experience with us. We will see you on March 30th! Be sure to follow Paulina on Instagram @pmimusicgroup. Mark your calendar for Transgender Day of Visibility, Tuesday, March 30th. Be part of the LGBTQ Center’s virtual event, visit thecentercv.org for more details.

One Fine Weekend in Joshua Tree