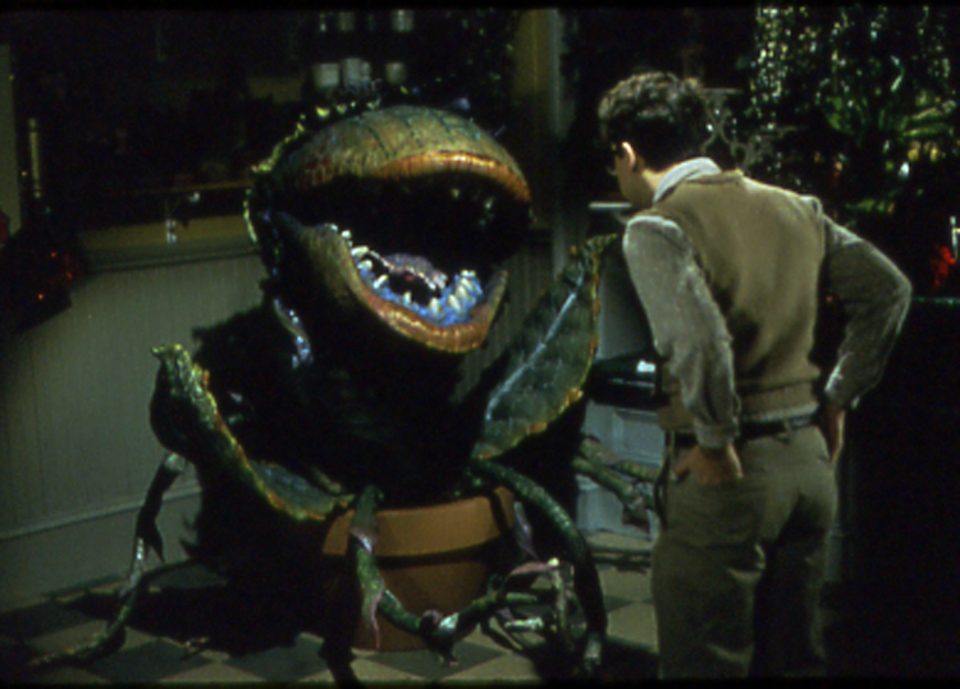 In the upcoming weeks there are some very special screenings for anyone who is a lover of musical theatre.  Three musicals, one a film adaptation and two that are video recordings of live performances, will be shown at the Palm Springs Stadium 9, 789 E. Tahquitz Canyon Way.  These are a great chance to see some outstanding Broadway musical performers at the peak of their game.

Moranis, Steve Martin, Vincent Gardenia and the hilarious Ellen Greene recreating her original on-stage role as Audrey.  The director of this Alan Menken and Howard Ashman musical, Frank Oz, has restored the original darker ending he created for the film.  When test audiences saw the movie, they wanted a happier resolution so the ending you most likely saw was the reshot “happily ever after” one.  So whether you’ve already seen the film or not, this is a great chance to watch this wonderful screen adaptation shown as the director originally intended it to be seen.  It is playing October 29 and October 31 at both the Palm Springs Stadium 9 and at The River 15 on Highway 111 in Rancho Mirage.  Show times for both days are at 2PM and 7 PM.
On November 16, 2017, both theatres are showing the recent Broadway

production of HOLIDAY INN.  Based on the perennial favorite film of the same title, the show features a terrific score loaded with Irving Berlin hit songs including “Blue Skies,” “Easter Parade,” “Cheek to Cheek,” and more.  This multi-Tony nominated musical was produced on Broadway by The Roundabout Theatre and stars nominees Bryce Pinkham and Megan Lawrence, as well as Lora Lee Gayer, Danny Rutigliano, Megan Sikora and “Dancing with the Stars” runner-up Corbin Bleu.  Show time at both the Palm Springs Stadium 9 and The River 15 theatres is at 7:30 PM.
Then on December 7, 2017, by no coincidence the anniversary of the Pearl Harbor attack, is the screening of the Broadway production of ALLEGIANCE

starring George Takei of STAR TREK fame and Tony Award winner Lea Solanga.  Taken from Mr. Takei’s own family history, ALLEGIANCE tells the story of one family’s extraordinary journey in a troubling time of a nation at war. A mysterious envelope leads Sam Kimura (Takei) back 60 years to a time when he (played as a young man by Telly Leung — Godspell, “Glee”) and his sister Kei (Tony Award-winner Lea Salonga–Miss Saigon, Mulan) strive to save their family from the wrongful imprisonment of Japanese Americans during World War II. Sam enlists in the army to prove his family's loyalty, while Kei joins the draft resisters fighting for the rights of their people. Their paths take them from the lush farmlands of California to the wastelands of Wyoming to thekk battlefields of Europe, and their divided loyalties threaten to tear them apart forever. But as long-lost memories are relived and a new perspective is gained, Sam finds that it is never too late to forgive and experience the redemptive power of love.  It is playing only at the Palm Springs Stadium 9 and starts at 7:30 PM

So don’t miss the chance to catch these three diverse evenings of musical theatre and show our support and interest in the performing arts here in Palm Springs.

VENUS IN FUR, a review by Stephen Radosh