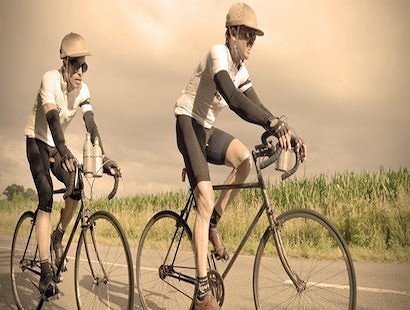 LE RIDE
In 1928 four intrepid young men from Australia and New Zealand, joined together and competed in what is considered by many to be the toughest sporting event in the world. They were undertrained, under-resourced, untested, and… unstoppable! Courageous underdogs, New Zealander Harry Watson and fellow Australians Sir Hubert Opperman, Ernie Bainbridge, and Percy Osborne were the first English speaking team to compete in the Tour De France.

Racing as a newly formed, untested team of four, competing against Europe’s most elite cycling teams of 10, many considered the Australasian’s entry a total joke. With some days taking longer than 20 hours, one French journalist called the Australasian’s attempt “nothing short of murder.”

Most riders failed to finish the 1928 Tour de France than any other Tour in history. The race was designed to eliminate as many riders as possible. Most of the roads were unpaved and poorly lighted; they rode these heavy steel bikes that weighed twice as much as a modern racing bike.

Surprisingly this incredible story about the irrefutable achievements of these four brave athletes has never been told on film until now. Three years ago Phil and his wingman Ben Cornell, decided to take on the biggest physical and mental challenge of their lives and attempted to recreate the 1928 Tour de France route on vintage steel bikes, with no gears to honor Harry Watson and his team.