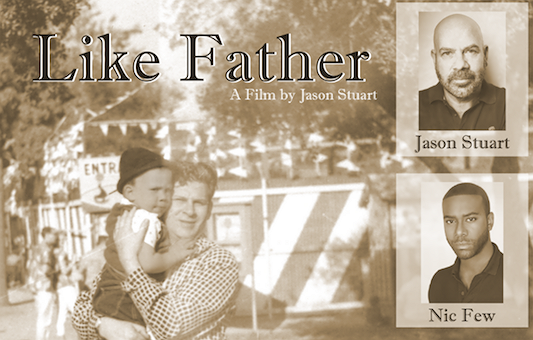 Prolific character actor and comedian JASON STUART is set to direct and star in the film LIKE FATHER, written by David A. Lee & Daniel Vaillancourt. This is a man who does not stop creating and working! Showing up and bringing heartbreaking and lol stories to the screen are this artists goal.
LIKE FATHER is a story of hope and forgiveness. Stuart plays a Jewish New Yorker who is the bedridden patriarch, dying of lung cancer. He confesses for the first time to his son that he was always attracted to men, despite his long-lasting marriage and faithfulness to wife.

Newcomer NIC FEW (Major Crimes, The Exes) plays his son and veteran character actress (Murder In The First, Secrets and Lies) and director (Recorded In Hollywood) DENISE DOWSE plays his wife. Rounding out the cast are TERRY RAY  (Joe Dirt 2) and DANIJAR.

Stuart is currently in the critically acclaimed film THE BIRTH OF A NATION as plantation owner "Joseph Randall" from filmmaker Nate Parker. He will next be seen on the Netflix series LOVE from Judd Apatow & Paul Rust. As well as the feature films DIVERTED EDEN, HOLLYWEIRD and OPEN.
The short film is raising money on GO FUND ME and will be produced by SCOTT CRAWFORD, ALEXANDRA PAUL, PAUL ELIA, TERRY RAY, CHRISTOPHER BAIZA and STUART.

February in the Palm Springs Oasis