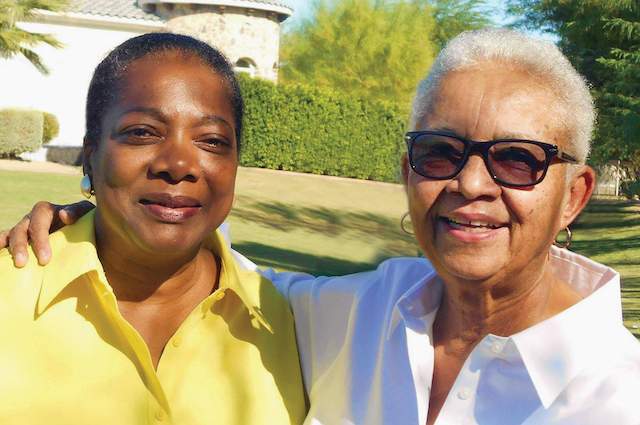 Since arriving in Palm Springs in 2003, Lucy and Gail have seen Palm Springs as a place for African-American LBGTQ people to live, thrive and participate in a social justice movement that saw itself within the context of a the struggle for civil rights. To connect with women of color within the LGBTQ community they began by having an annual backyard party during the Dinah Shore Weekend called ‘Dinah in Color’. This event was the beginning of creating a measurable African-American Lesbian presence in the Coachella Valley of Lesbians who would go on to becoming active members in all aspects of the LGBTQ community. By 2012 they had became known Lucy and Gail, producers of events of interest to women; especially their Palm Springs Women in Jazz Festival. The events became more integrated and today draw lesbians of all colors to events and activities where it is common to see people of other races and cultures.  The focus is now on helping to shape a LBGTQ community where social justice and issues of equality are discussed and share the same importance as issues of gender and sexuality.

Keynoting the Breakfast will be State Controller Betty Yee. Ms. Yee has more than 35 years of experience in public service, specializing in state and local finance and tax policy.  Previously she served as Chief Deputy Director for Budget with the California Department of Finance where she led the development of the Governor’s Budget, negotiations with the Legislature and key budget stakeholders, and fiscal analyses of legislation.  Prior to this, she served in senior staff positions for several fiscal and policy committees in both houses of the California State Legislature.  She also cofounded the Asian Pacific Youth Leadership Project, which exposes California high school youth to the public service, public policy, and political arenas. Ms. Yee is dedicated to creating incentives to increase the number of affordable housing units, spur economic development, support pollution-control innovations, and strengthen health and educational facilities.

This year the breakfast is commemorating the 50th Anniversary of the Stonewall Uprising which is known as the birth of the modern LGBT movement, and the Assassination of Harvey Milk, the first openly gay elected official in California, and his legacy of groundbreaking inspiration in the struggle to achieve lesbian, gay, bisexual and transgender equality.  The event is designed to strengthen coalitions among the many diverse community organizations that work toward equality in the Coachella Valley and benefit Coachella Valley youth through Gay-Straight Alliance clubs and LGBT youth related programs.

Registration for the event begins at 8:45 am, Program & Breakfast from 9:30 to 11 am. For tickets or more information click here.

Coachella 2019: 25 Photos of Some of the Best Fashion We Saw at Coachella