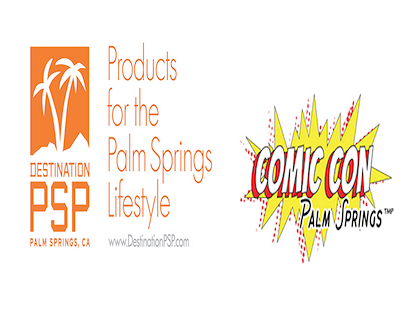 The popular event returns to Palm Springs August 25 – 27, 2017 at the Palm
Springs Convention Center, located at 277 N. Avenida Caballeros. As part of the partnership, Destination PSP will offer branded caps, beanies, clocks, newly designed t-shirts, jean jackets, key chains, shot glasses, lamps, watches, towels, and much more. Destination PSP will introduce new items each month leading up to the event, and all Destination PSP stores in Coachella Valley will offer the full collection of Comic Con merchandise during the event. In addition, Destination PSP will also be an official ticket outlet for all Comic Con events.

All three Destination PSP store locations (the flagship store at 170 N. Palm Canyon, the boutique at Riviera Hotel and the shop at Renaissance hotel) will also sell event tickets and serve as information centers about the Comic Con convention and events.

Comic Con Palm Springs debuted last year in August and attracted nearly
15,000 attendees. The attendance is expected to increase this year and show organizers have announced that several major celebrities (including artists, authors, celebrities, producers and voice actors) will make appearances at the event.  "We are delighted that Destination PSP has been selected to be an official producer and distributor of Comic Con merchandise,” said Jeffrey Bernstein, coowner of Destination PSP.

Comic Con Palm Springs has quickly become a signature event for the Valley, but through our merchandise and in store presence we are able to promote it year round. With our exclusive retail arrangements with the Riviera and Renaissance Hotels, we can offer unique
added value.”

In addition to offering new items each month, Destination PSP and Comic Con Palm Springs will produce monthly contests and events at the main store, which will feature appearances by artists, actors and CosPlayers (fans that dress up as a character from a movie, book, or video game).
“We are thrilled to partner with Destination PSP in a much broader scope,” said Comic Con Palm Springs Executive Producer Christopher Spellman. “Comic Con attendees expect a high caliber line of products that match the quality experience they have at the event, and we have seen that Destination PSP can provide this quality element. We are also excited that all three Destination PSP locations will serve as official ticket centers before and during the event.”