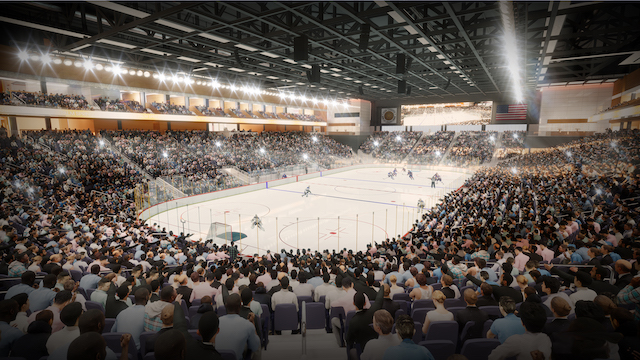 The Agua Caliente Band of Cahuilla Indians, Oak View Group (OVG), the global venue development, advisory, and investment company for the sports and live entertainment industries and Live Nation Entertainment, the world’s leading live events company, today announced the official groundbreaking and start of construction on the New Arena at Agua Caliente in downtown Palm Springs, a new multi-purpose, state-of-the-art privately financed sports and entertainment arena in downtown Palm Springs.
The groundbreaking ceremony will take place at 1:00 p.m. Tuesday, February 18 at 353–399 N Calle El Segundo, Palm Springs, on the Agua Caliente Indian Reservation. All are welcome to attend. To reserve a free ticket and a complimentary commemorative gift, visitwww.ticketcactus.com.
“On behalf of our partners at Agua Caliente, OVG, NHL Seattle, and Live Nation, we are thrilled to break ground on the New Arena that will transform the entertainment and sports scene in the Coachella Valley. It’s time Palm Springs had a world-class arena and we’re excited to make this a reality,” said Tim Leiweke, CEO of Oak View Group.
John Bolton, Senior Vice President of Entertainment at Oak View Group and General Manager of the New Arena in Palm Springs continued, “With shows from the biggest artists in the world, to professional hockey and sporting events, we believe the arena will become a much sought-after destination for families and fans across the Coachella Valley.  We look forward to continuing to work with our neighbors and partners in the community to create an experience for our customers that will be second to none.”
The new arena is Palm Springs will be limited to 20 suites and less than 1,000 club seats; all part of an initiate design intended to create an incredible hockey atmosphere and the most unique concert arena in the country. Deposits are currently available at www.ahlpalmsprings.com, where you can also submit a request for additional information regarding suites.
Located on 16 acres of tribal land, the arena will be more than 300,000 square feet and feature as many as 10,000 seats or more and include modern amenities such as suites and premium hospitality clubs. Built for conventions, large meetings, international events, award shows, and exhibitions, Live Nation Entertainment, the world’s leading live entertainment company, will supply the New Arena top touring artists and premium live events. The arena will also be home to the Coachella Valley’s first professional winter sports team and include an adjoining facility that will serve as a year-round community gathering space as well as the training center for an AHL team.
With an anticipated completion of Fall 2021, construction of the new arena is expected to create thousands of permanent and temporary jobs for the community. Privately funded, the New Arena will be built on land fully owned by the Agua Caliente Band of Cahuilla Indians and comes at no risk to the City of Palm Springs or taxpayers.
“This is going to be a great asset for the community,” Tribal Chairman Jeff L. Grubbe said. “I’m excited for hockey, the sporting events and other special events. We are all excited for it, and we can’t wait to see it open in fall 2021 in time for hockey season.”
The groundbreaking comes as OVG is in the midst of a building boom. In the past 24 months, OVG has announced the redevelopment and operations of the New Arena at Seattle Center as well as leading arena development projects in Elmont, NY, Austin, TX, Manchester (UK), and Milan, Italy. OVG is the largest developer of new arenas in the history of the industry.
For more information the New Arena at Agua Caliente, please visit www.visionaguacaliente.com.

Sunday Pool Party at The Dinah 2020 to Feature Jozzy & Swsh