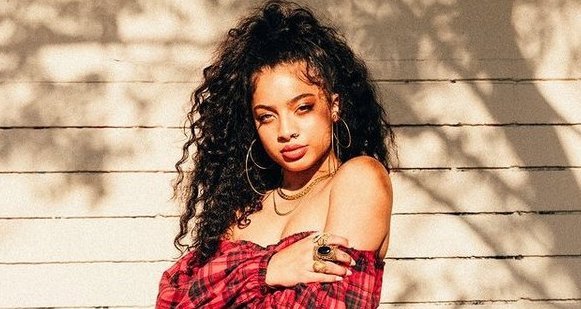 Kiana Ledé will be bringing her soulful R&B stylings to the Dinah stage, sharing her confessional and catchy songs to connect and unite us all! A self-made singer, songwriter, and actress, Kiana’s message is one of empowerment and never giving up despite challenges and disadvantages. She explains that growing up as a mixed race girl, she was able to pull from many influences, making her music so unique in today’s world full of copy-of-a-copy pop stars. See below more more on Kiana’s story and keep and eye on her meteoric rise to the top!

They say pressure creates diamonds. Under the heat, tension, and force of the world, the truest artists are born. Long before Kiana Ledé emerged as a new kind of multi-hyphenate—singer, multi-instrumentalist, and actress—she underwent the kind of pressure that makes or breaks even the toughest among us. Born to a Mexican and Native American self-raised mother and an African American and Native American father, raised by the tough streets of Philly, the Arizona native shuffled in and out of tense situations, with little to no money throughout her formative years, developing a strong sense of identity that fuels her art to this day.

“Growing up as a mixed race girl, I’m able to pull from so many influences,” she exclaims. “I see it as a super-power, really. I am not one thing, so my music doesn’t have to be one thing either. It also allows different types of people to relate to it and to my story. Those firsthand experiences aren’t just about me either, but also about what my father and mother went through. Dad’s taste in music was rap and R&B, so I grew up listening to what he loved in his house. Then, at my mother’s house, where I spent most of my time, I had a totally different musical experience. She’s a school teacher who was raised in the foster care system and made a life of her own, and so much of her struggle and how she became the woman she is, informs me daily. I only write about my experiences. I think actually going through real experiences makes me be able to give more depth and life to my songs.”

Those experiences remain worthy of a novel…

Music immediately called to Kiana. She started singing “right after learning the ABC’s at 15 months old.” Distracted at school, songs would play in her head all day as she spent countless hours honing that voice as well as learning guitar and piano. After her mother entered the budding talent into an online competition, Kiana landed her first deal at 15 years old. Despite making her television debut on The Today Show and performing during the Macy’s Thanksgiving Day Parade in 2012, the deal eventually fizzled out, leaving her heartbroken.

She didn’t stop, though. Instead, she moved to Los Angeles by herself and fought hard to keep that career going.

“Moving to LA at such a young age meant I had to grow up really fast,” she goes on. “I had a nine-to-five and was in two sessions a day, grabbing any extra music gig I could to be able to afford to live. I went through adult hardship with the coping skills of a 16 year old. I was a very trusting kid, so I learned pretty quickly that a lot of people are out for themselves, even if they tell you they’re on your team. I had to get street-wise and build my business.”

She did so by nimbly breaking down walls, acting and making music. Taking the reins and going D.I.Y., she launched the #SoulFoodSessions in 2016, acoustically serving up piping hot popular covers and generating over 50 million views in addition to a storm of coverage. Around the same time, she joined the cast of MTV’s Scream for season two in the role of Zoe Vaughn. Recognizing the grind, Republic Records Co-Founder and Chief Executive Monte Lipman personally signed Kiana. Joining the roster, she contributed “Big Spender” to the chart-dominating official soundtrack for Fifty Shades Freed and released the 2018 debut EP, Selfless. As she received acclaim from Refinery29, Baeble Music, Complex, stupidDOPE, and more, the single “Fairplay” has amassed more than 10 million streams and attracted A$AP Ferg for the remix. Powered by a fiery fusion of R&B, pop, alternative, and indie, she drops lyrics that toe the line between confessional and catchy.

A message of empowerment threads everything together.

“Being a young brown woman, I constantly feel like I have to prove myself, and I want to make other brown women feel like they relate and are empowered,” she continues. “Though I am very sex positive, the music industry always pushes to over sexualize curvy brown girls and objectify them. I fight against that every day and make it a point to be seen as more than just my body. I want people to know me for my art and respect it.” Kiana’s sense of empathy grants her the latitude to communicate stories on screen. 2018 saw her assume a starring role on NETFLIX’s All About the Washingtons alongside the legendary Joseph “Rev Run” Simmons and Justine Simmons.

“I know how to breathe life into a character by just sort of putting myself in her shoes,” continues Kiana. “I always look for those similarities that I have in common and use those to my advantage.”

In the end, Kiana makes a lasting connection with audiences by holding nothing back.

“I hope people feel the vulnerability and truth in my music and see it as something strong,” she leaves off. “I hope they find self-awareness and self-worth in my music. I hope they hear my story and my struggles and find something to take away from it that makes them feel powerful. I want women to know that you can be vulnerable and strong—that you can be in control and not be taken advantage of. Perhaps most importantly, I want everyone who hears my music to know that I am no victim. I am in control of my own destiny and path and I embrace all the flaws and mistakes I have made because they make up who I am.” 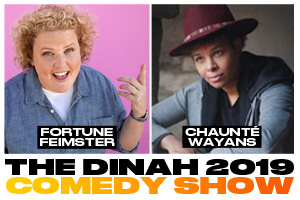 With so many amazing musical performances already on the books, we’re excited to welcome our hilarious comedy talent for The Dinah 2019: Fortune Feimster and Chaunte Wayans! Both of these amazing women are making huge waves in the comedy world, appearing in feature films and on hit TV shows across major networks, collaborating with the likes of Chelsea Handler and Katt Williams, and releasing stand up specials on Comedy Central and Netflix. Both women are wonderful examples of never holding back your talents and powering through to find massive success in a traditionally male-dominated industry. We can’t wait for them to put stitches in your side at The Dinah’s Comedy Show.

Don’t forget that this special event is not included with the basic weekend pass. Get your ticket for the Comedy Show HERE!

After making her debut with 2016’s double-platinum single “Hide Away”, 20-year-old singer/songwriter Daya wasted no time in skyrocketing her career. Soon after, she won her first ever Grammy Award for smash collaboration with The Chainsmokers “Don’t Let Me Down” (6x platinum), released a gold-certified album, and headlined a national tour. Just months after debuting at #5 on Billboard’s 21 Under 21 list in 2016, the Pittsburgh-born independent artist emerged as the youngest honoree on Forbes’ 30 Under 30 music list in 2017. In addition to signing with Interscope Records and releasing two of her own singles (“New” and “Safe”), Daya has collaborated with Gryffin/Illenium (“Feel Good”) and RL Grime (“I Wanna Know”).

Bri Steves is a classically trained yet self-made sensation who taught herself to play piano as well as engineer and produce her own music while attending Temple University and performing with the Delaware Symphony Orchestra. She’s a rapper, singer, poet and multi-instrumentalist who cut her teeth performing in the subways of Philly before inking a deal with Atlantic Records and taking off with new single “Jealousy.”

Enigmatic musician Leikeli47 is on a meteoric rise with her new album, Acrylic, recently released by RCA Records and applauded by the likes of Pitchfork, Noisey, NME, The FADER, and just about everyone else in the who’s who of music journalism. Co-producers on the album include Clyde & Harry (Ludacris, Ghostface Killah), Dave Hamelin (The Belle Game, Sam Roberts Band) and Harold Lilly (Alicia Keys, Beyoncé, Zayn Malik). Leikeli47 has notched several appearances on the soundtrack for HBO’s Insecure, most recently with Acrylic‘s infectious single “Girl Blunt”, and has performed for Natalie Portman, appeared with Lion Babe at Coachella, and had her inaugural ArfroPunk performance—something up-and-coming artists only dream of.

Rising pop star Dorian Electra makes music that defies gender norms. In the past year, their work has gained a queer cult following and led to them being named a must-know talent by Buzzfeed and one of PAPER Magazine’s “100 Women Revolutionizing Pop.” Not only that, but Electra has also quickly built a dedicated following thanks to their futuristic spin on 00s pop, 80s funk, and a long-standing love of satirizing rigid gender roles and views on sexuality.

Burgeoning Atlanta hip-hop talent Kodie Shane recently released Young HeartThrob (Epic Records), a new album that has seen praise from the likes of HighSnobiety, Complex, and VIBE, who say “Shane is set to make significant noise in the industry as one of 2018’s most promising young artists.” Young HeartThrob shows off Shane’s wide creative palette, dipping in and out of moments of pop bliss, hip-hop grit, and future-facing alternative ambience.

Shane’s 2016 debut EP features fan-favorite “Sad (feat. Lil Yachty)” which garnered millions of Spotify streams, followed by the runaway success of “Drip on My Walk”. Across her releases, the artist has garnered praise from The FADER, Pitchfork, Vogue, Pigeons and Planes, Paper, NYLON, W Magazine, Interview Magazine, Mass Appeal and more. Most recently, Billboard named her one of 2018’s biggest pop stars to watch and she covered Galore’s Spring 2018 Music issue. The genre blending innovator has shared the stage with the likes of Lil Yachty, Lil Uzi Vert, The Internet, Snakehips, Billie Eilish.

Eden Entertainment Group artist Diiamon’d Royalty is widely known in the LGBTQIA+ community for being a viral YouTube sensation after her freestyle video shortly broke the internet with over 1.5 million views. Not only is she a great freestyle and recording artist, but she’s a dynamite entertainer. She draws in her audience with her ability to lay it all out there and be her true self, thrilling audiences with her clever rhymes and smooth delivery. Her debut album Mirrorz (listen on Spotify) shows her growth and versatility as an artist. Diiamon’d Royalty is not a name you will forget soon and she is certainly a rapper to watch!