The Palm Springs Human Rights Commission will honor local community leaders and one organization for outstanding contributions promoting human rights, social progress and equality for everyone at its annual Community Service Awards on Monday, Feb. 10, 2020.

The 3 p.m. ceremony is free to attend and will be held in the Council Chamber at City Hall, 3200 E. Tahquitz Canyon Way. This year’s recipients for 2020 are:

Joy Brown Meredith, a 32-year downtown business owner, Meredith joined the board of Main Street Palm Springs in 1992 and has served on the board ever since. She believed the City needed an organization to strengthen the downtown business community and through the years she has provided the leadership that established the organization as a pivotal voice in the community.

Brothers of the Desert is recognized for building interpersonal relationships by nurturing, supporting and connecting black gay men in Coachella Valley through philanthropy, volunteerism, mentorship, education, advocacy and social networking. Their work includes supporting a scholarship fund and hosting social gatherings to build community. They are also recognized for engaging the community with a wellness summit called Living Your Best Black Gay Life.

Ginny Foat served 14 years as a City Councilmember and for several years as executive director of the Mizell Senior Center. While on City Council, she was a strong voice for residents and neighborhoods and worked to establish ONE-PS as a conduit for grass roots, neighborhood concerns. She has long advocated for under-served and/or under-represented people, including senior citizens, the LGBTQ community and homeless residents in the Coachella Valley.

Rabbi David Lazar serves as the spiritual leader of Or Hamidbar. As a Jewish educator, he promotes inclusive Jewish practice and interfaith dialogue. Rabbi Lazar was among the earliest international LGBTQ advocates, performing the first gay wedding in Israel in 2001, years before same-sex marriage was legal there.

Katherine V. Forrest is a groundbreaking author who has presented lesbian and gay lives with dignity over three decades. She is the author of Curious Wine, the Kate Delafield mystery series and the Daughters science-fiction series. A prolific editor with anthology and non-fiction credits, she is the editor of hundreds of novels. Dozens of lesbian writers count her among their mentors.

Chief Bryan Reyes is recognized for increasing the police department’s community presence, visibility and communication. Under his leadership, the department is actively involved in our neighborhoods and engages and partners with civic groups and citizens to achieve a shared goal of creating a safer and better Palm Springs for all. He is also recognized for his commitment to officer training and installing an accepting and welcoming organizational culture for all.

Brian Wanzek, also known as “Bella da Ball,” is the ultimate community volunteer. Brian has served the community for over 20 years by volunteering, entertaining and helping to raise funds for many organizations, groups and charitable events. Bella has a star on the Walk of Stars Palm Springs, has been recognized by Safe Schools Desert Cities as “Champion for LGBT Youth” and received the Herb Lazenby Community Service Award from AIDS Assistance Program. 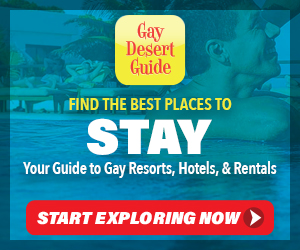