It’s getting to be that time of year when charities ring their silver bells for donations, mall Santa’s thrill kids who are still young enough to believe in him and IN 1949 Hedda Hopper conducted a now famous and totally false live radio interview with Joan Crawford in attempts to help revive the actress’ sagging career.  As a side note, it is commonly believed that Hedda Hopper helping out her good pal Joan Crawford, was the major influence in causing Bette Davis to not win the Oscar for “”Whatever Happened to Baby Jane?”  But I digress…….

Unlike the carefully staged, sugary and totally fake actual interview, CHRISTMAS WITH THE CRAWFORDS, Created by Richard Winchester, Written by Mark Sargent, presents it as an evening of chaos where a veritable horde of celebrities appear at the front door mistakenly thinking they were at the A-List Xmas party of Gary Cooper who lives next door.  So interrupting and hogging the spotlight away from the increasingly manic Joan comes the likes of Judy Garland, Mae West, the Andrew Sisters, Ethel Merman and Gloria Swanson among others.  After trading quips with the reluctant hostess and performing a Christmas song, ostensibly for the listening audience, Joan manages to get in just a couple of words before the doorbell rings again.  Throughout all of this, Joan’s 2 adopted children Christina and Christopher, keep spilling the beans to Hedda Hopper on how crazy their mother really is and what kind of childhood they actually have living with Mommie Dearest.

It’s not much of a plot but it’s a great vehicle for allowing the appearance of so many big stars into its fast-paced 90 minutes.   The fact that all of these big female stars are played by men only adds to the already huge camp value of the piece.  The often hilarious dialogue incorporates many famous lines spoken by these icons in their various films here redirected as barbs to Joan.  Needless to say, this continual parade in and out of her house on the one night when her sagging career has a chance to blossom anew, takes a toll on her already questionable state of mind as the play barrels forward to its end.

The cast, many of whom were in last year’s production, all seem to be having a really good time onstage as does the audience, although there were a few moments where I felt like the actors were all in on a joke that wasn’t shared.

Almost everyone has multiple roles.  Stan Jenson portrays Ethel Merman, one of the Andrew Sisters and is at his best playing Mae West.  Ed Lefkowitz plays Katherine Hepburn and the relatively larger and more outrageous role of Carmen Miranda.  Timm McBride gets to chew the scenery as Baby Jane Hudson and has

fun with a perpetually surprised and often totally baffled Hedda Hopper.  Anthony Nannini is one of the Judy Garland.  As Joan’s adopted son Christopher, Christine Tringali-Nunes makes him a constantly nervous and anxious kid who would like to be anywhere other than at home with Mommie Dearest.  Larry Martin’s Christina Crawford clearly looks forward to the day when she will get her revenge and, as we all know, she definitely does. Timothy McIntosh plays the 3rd Andrew Sister but it’s his Gloria Swanson that gets well-earned kudos from me.  From head to toe, he truly becomes the star, of course taken to a larger than life level, and provides hilarious results for his efforts.  He never breaks character for a second and more important, at least to me, is that he never acknowledges in any way that he is being funny.  He speaks with the same dead-pan sense of earnestness and importance that the real Gloria gave to her immortal line “I’m ready for my close-up Mr. DeMille.“  Brava.

Finally, kudos must also go to Kam Sisco, not only for his hilarious Joan Crawford whose eyes, not to mention shoulder pads, could kill on contact, but also as the show’s director who never lets the energy sag and through his very fluid staging keeps up the brisk pace for all 90 minutes.

I would be really remiss if I did not single out Matthew McLean’s set design and the incredible costumes designed by Bruce Weber.  Mr. McLean’s set is full of wonderful period detail and gives the look and feel of solidity that makes it a thoroughly believable Brentwood home fit for a star like Joan Crawford.  Bruce Weber’s costumes combine period accuracy with a wink and a smile via slight exaggerations (those shoulder pads!) which is, of course, perfectly in keeping with the tone of the entire play.  It wouldn’t surprise me if Gloria Swanson herself came back from grave just to try on the costume worn by her namesake.

So, is it a deeply moving and profound piece of theatrical poetry? Not even close.

Is it a funny, campy, over-the-top comedy that will have you laughing out loud?  It definitely is!!!!!

CHRISTMAS WITH THE CRAWFORDS is at the Desert Rose Playhouse now through Dec. 22, 2019.  For more information or to buy tickets, go to www.DesertRosePlayhouse.org or call 760-202-3000. 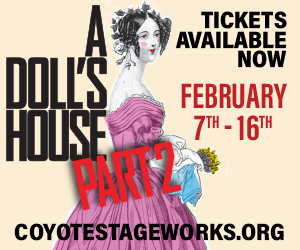 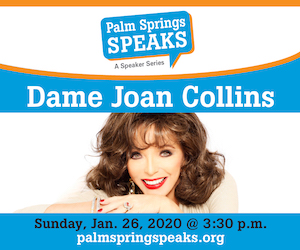