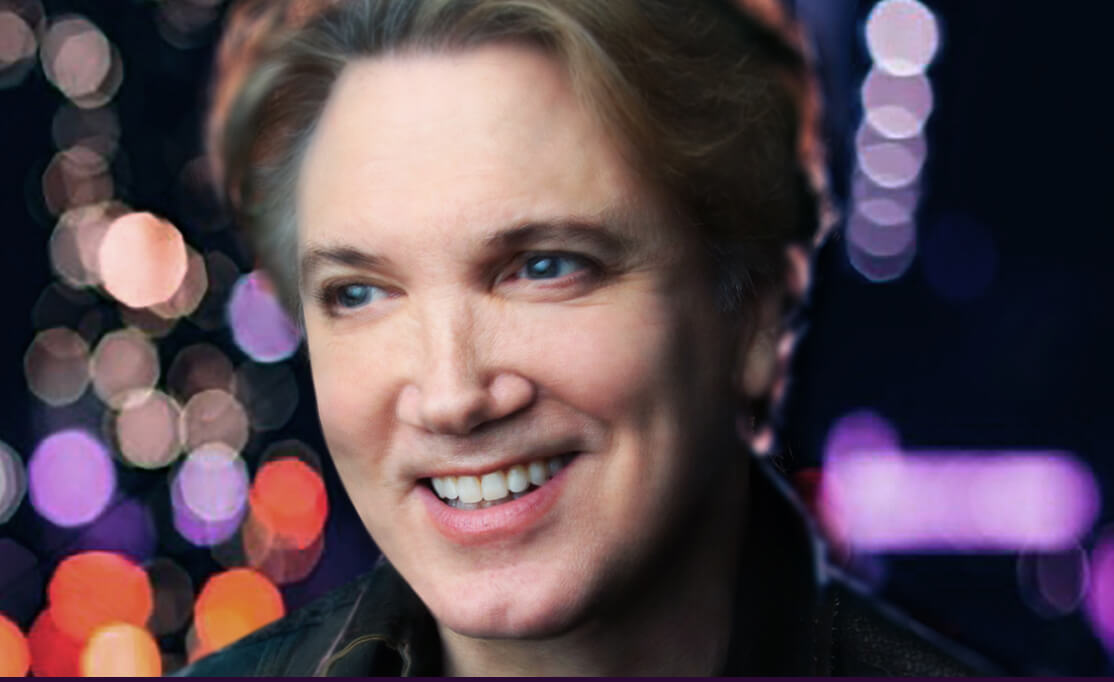 On Friday April 5 and Saturday April 6, Charles Busch performs an eclectic songbook from the seventies and early eighties, telling an outrageously comic, yet also poignant tale, of his early years striving to find a place for himself in show business. Songs include the work of Michel Legrand, Rupert Holmes, Stephen Sondheim, Jim Croce among the best of Broadway, film and pop. Busch is the author and star of such plays as The Divine Sister, Vampire Lesbians of Sodom, The Tribute Artist and The Tale of the Allergists Wife, which ran for nearly two years on Broadway and received a Tony nomination for Best Play. He wrote and starred in the film versions of his plays, Psycho Beach Party and Die Mommie Die.

We all have that friend who can find a song cue at any point in the conversation and that friend is Jerome Elliott, returning to The Purple Room for the fourth consecutive year with his seamless weaving of storytelling and song on Friday, April 12. “King of the Song Cue Ball” will include Elliott’s favorite tales and tunes from his seven hit cabaret shows as well as new stories and the songs they inspired, with selections from Broadway, contemporary cabaret and the American Songbook. Music direction is by renowned cabaret pianist Denis Moreen.

Scot Bruce brings a young Elvis Presley to life on Saturday, April 13 with his singing, guitar-playing, and hip-swaying. Scot is recognized as the country’s preeminent Elvis performer with CNN declaring, “The closest they can get to Elvis in the flesh is Scot Bruce.” He returns also on May 11 and June 8.

The Winehouse Experience, featuring Mia Karter pays musical tribute to Grammy Award-winning singer Amy Winehouse, on Friday, April 19. Distinctively warm vocals, soulful songwriting and signature style made Winehouse a beloved world-renowned icon. Backed by a 9-piece ensemble complete with Amy’s signature horn-section and choreographed male back-up singers, The Winehouse Experience will blow you away with their breathtaking musicianship and infectious energy as they bring Winehouse’s music to life, including “Rehab”, “You Know I’m No Good”, “Back To Black” & more, plus classic covers like “Cupid”, “Valarie” and “Will You Still Love Me Tomorrow”.

Lee Squared features New York City favorites David Maiocco as Liberace and Chuck Sweeney as Peggy Lee, coming to the Purple Room on Saturday, April 20. Long-time friends and collaborators,  Maiocco and Sweeney had been performing these iconic characters individually and imagined what it would be like if both performers were alive and touring together today. The result is an evening of music and laughter, from the virtuoso playing of Liberace, to the sultry jazz and swing of Miss Lee. These two music legends defined four decades of music and pop culture.

Tony Award nominee Ann Hampton Callaway salutes songs made famous in films in “Jazz Goes to the Movies” on Friday, April 26. This show, is a celebration of the golden age of songwriters from the 30’s and 40’s who wrote love songs for the silver screen that gave people dreams when they needed them most. The playlist includes Taking a Chance on Love from Vernon Dukes’  “Cabin in the Sky”, Let’s Face the Music and Dance from Irving Berlin’s “Follow the Fleet”, This Time the Dreams on Me, from Harold Arlen’s “Blues in the Night”, and As Time Goes By, the Herman Hupfeld classic from “Casablanca”. Callaway also performs jazz songs she has recorded for films, including Come Rain or Come Shine from “The Good Shepherd”, and The Nearness of You from “Last Holiday”.

Renee Olstead has garnered much attention both domestically and internationally for her television and film appearances, including Unfriended, Still Standing, and The Secret Life of the American Teenager. Her acting prowess, however, is matched only by her vocal talent. At the age of twelve, Renee signed to Warner Brothers Records and completed two albums produced by 16-time Grammy winning producer David Foster. Renee’s debut album received a Grammy nomination for Best Arrangement “Summertime” and a Golden Globe nod for Best Original Song in a Motion Picture, “Christmas in Love”.

And, as always, Purple Room proprietor and entertainer Michael Holmes, owner of the desert’s premier supper club, will delight audiences with his highly popular, high-octane Judy Garland impersonation in “The Judy Show!” with pianist Joel Baker every Sunday: April 7, 14, 21, and 28.

The Purple Room’s fantastic Jazz Happy Hour continues with Mark Kahny and Trish Hatley from 4 to 6 p.m. Tuesday through Thursday, with free evening entertainment (no ticket or cover required) each night:

Inspired by Sinatra’s favorite spirit, the Purple Room has launched “Frank’s Bourbon Bar” offering more than 50 rare and premium bourbons that include the ultra-exclusive and limited, Pappy Van Winkle from Buffalo Trace Distillery in Kentucky. Known to give whiskey lovers goosebumps, bottles of Pappy Van Winkle are scarce to invisible and can fetch a hefty price. The Purple Room is excited to give patrons the rare opportunity to try the Old Rip Van Winkle 10 Year, Van Winkle Special Reserve 12 Year and the Pappy Van Winkle 15 Year at a tremendous savings with the “Grand Pappy Flight” offered at $55 for the flight. In addition, Frank’s Bourbon Bar offers a “Premium Bourbon Flight” at $35 and a “Standard Bourbon Flight” at $25 each. Just a few of the other renowned bourbon’s at Frank’s Bourbon Bar are Angel’s Envy, Bookers, George T. Stagg Jr., Weller 12yr, Four Roses Single Barrel, and more including Heaven Hill Distillery’s Henry McKenna Single Barrel that won “Best Bourbon” across all categories at the 2018 San Francisco World Spirits Competition.

The Purple Room, located at 1900 E. Palm Canyon Drive, Palm Springs, California 92264, opens every day at 4 p.m., with Happy Hour in the bar and lounge from 4 to 6 p.m. Monday through Saturday; and from 4 to 5 p.m. Sunday. Dinner and free entertainment can be enjoyed every Monday through Thursday night (no cover).

Ticketed shows on Friday and Saturday nights begin with dinner reservations at 6 p.m. and performances at 8 p.m. For “The Judy Show” on Sundays, dinner reservations are at 5 p.m., with the show beginning at 7 p.m. Details and ticket information can be found at purpleroompalmsprings.com.

LGBTQ Bars Around the World That Are Reopening