Acqua California Bistro and David Green’s Musical Theatre University are thrilled to announce that Broadway at The River-Hollywood Edition Presented by the City of Rancho Mirage has set five dates in February and March. These shows feature a fully-staged and costumed song and dance celebration of music from the movies featuring the students from MTU with their special Broadway friends and a delicious three-course dinner! This is the fourth all new show in a series that has sold out every performance since opening at Acqua in July 2019.

The new line-up of “Broadway friends” for the Hollywood Edition includes:

“We’re so grateful for the community support that made the Broadway at The River series and its companion, Musicals on Mondays, huge successes and we look forward to delighting even more audiences with the Hollywood Edition,” said MTU director David Green. “The commitment to excellence from our MTU cast and the support given to us from our ‘Broadway friends’ and the City of Rancho Mirage makes this series very special.”

Broadway at The River-Hollywood Edition Presented by the City of Rancho Mirage is a dinner theater show (with intermission) featuring the students of Musical Theatre University performing as “singing waiters” and as the cast of a Broadway and Hollywood- themed song and dance revue. A guest performance from a rotating cast of Broadway stars caps each show.

Tickets are on sale now for all dates and are just $54.50 for the show and a terrific three-course meal, including tax and gratuity! Doors open to Acqua’s gorgeous River Room at 5pm, and the show begins at 6pm. Reservations can be made by calling Acqua at 760-862-9800.

“Broadway at The River is a huge success,” said Acqua founder Jerry Keller. “We’re proud to support Musical Theatre University and their student actors from across the Valley and David Green’s passion to introduce these immensely talented young performers to the stage. We’re looking forward to Broadway at The River-Hollywood Edition and it promises to be terrific fun for everyone.” 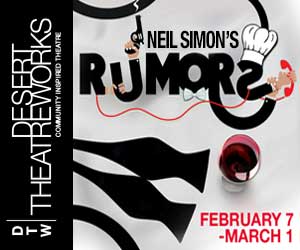