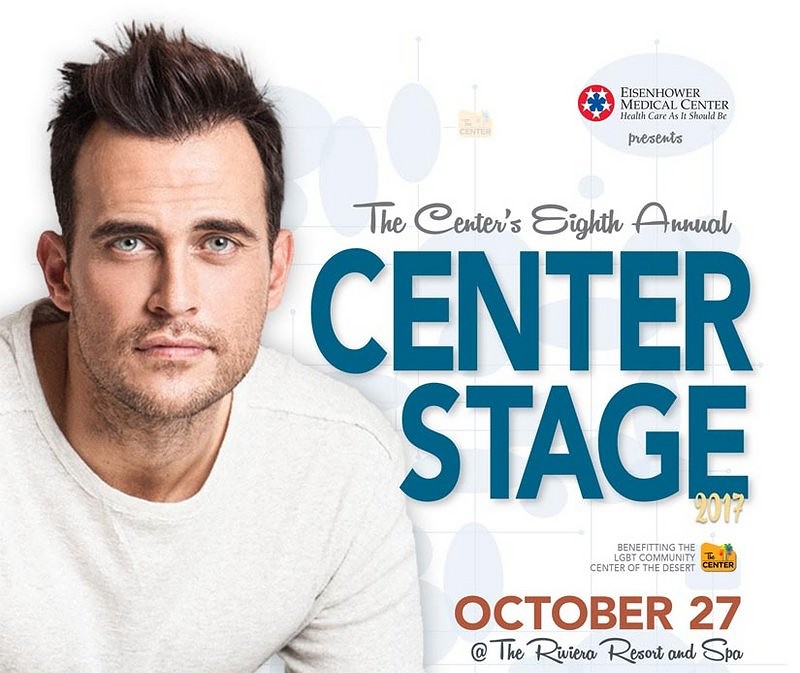 Philanthropists to be Honored at Center Stage

Two long-time local LGBT philanthropists will be recognized for their decade-plus support of The LGBT Community Center of the Desert at the annual Center Stage Gala tonight (Friday, October 27, 2017) at the Riviera Resort in Palm Springs.

Involved since the early days of The Center, when it was known as the Prime Timers of the Desert Foundation, David Hood & George Sellers have been integral to the evolution and success of Eastern Riverside County’s only LGBT community center. In 2005, when The Center opened its first location, David led fundraising efforts to build community support and raise money to help offsets costs. Since then, the couple has been a constant, stepping up with personal gifts and spearheading fundraisers for the organization’s subsequent relocations, most recently with The Center’s 2016 $3.5 million capital campaign.

“Without David & George’s leadership and generosity, The Center would not exist. We are forever grateful for their commitment,” said The Center’s Board Chair, Brian Rix.

The Center Stage Gala, presented by Eisenhower Medical Center, will feature the multi-talented actor, singer, and songwriter Cheyenne Jackson as the musical headliner and political comedienne Kate Clinton as returning emcee and host. Individual tickets, which are $195, while still available, are selling out fast. More Info

Join us to reflect, remember, and stand up against hate violence around the world.

We will join in memory of all victims of hate crimes and remember George Zander on the 2nd anniversary of the day he and Chris Zander were attacked in downtown Palm Springs. George died on December 10, 2015.

On the anniversary of the attack we will gather to reflect. Help us carry forward the social justice efforts that defined George Zander’s life and honor his memory so that no other individual falls victim to a crime of hate. We must remain determined to change hate, intolerance, and ignorance into love and acceptance.

The vigil will begin on La Plaza, in front of Grand Central, and features a rally and march through the heart of Palm Springs. We will never forget.
Join us and community sponsors as we speak out against hate.  More Info

Outlandish Palm Springs is a performance series produced by Logo Founder Matt Farber.  You'll never guess who's on the bill! GayDesertGuide is a media partner.

Sordid Lives creator Del Shores new one-man show directed by Emerson Collins proves once again that he is not a writer, he’s a self-proclaimed thief!  In Six Characters In Search Of A Play, Shores is inspired by Pirandello’s classic play to bring you six characters inspired by his real-life encounters that haven’t quite made it into one of Shores’ plays, films or TV shows. In 90 minutes, the audience will hear the truth behind how he collected these eccentrics, then he will portray them in classic Shores’ monologue style.

Miss Richfield 1981 returns to Palm Springs with her brand new show, “2020 Vision—A Survival Guide For The New World”, an official Palm Springs Pride event.   The show features Miss Richfield 1981’s  unique take on audience participation along with new songs, new videos, and most importantly, a new message for our new world!   During these strange times, Miss R wants to provide a message of hope—or at least survival!

Coco Peru – The Taming of the Tension Nov 11th

Miss Coco Peru has been a little tense lately and one of the things that Coco likes to do when she is tense is invite friends over to her place for tea (and/or cocktails) and a good old-fashioned bullshitting session. Coco is now inviting you to her "place" for some of her favorite stories, songs, and a good dose of bullshitting with the hope that together the tension will melt away! And for the first time ever Coco will be taking questions from her audience! So, think of good ones to ask!!!

Randy Rainbow – BOTH SHOWS SOLD OUT

Doors open at 7 PM for all performances at 8 PM, and a percentage of the proceeds will be donated to SAGE USA and SAGE of the Desert, a program of the LGBT Center.  Buy a series pass and save money!

Venus in Fur by David Ives opens the CVRep's season.

Angela Sauer has appeared in a wide variety of roles from Shakespeare to TV’s Masters of Sex. Regional theater appearances from New York and Chicago to Los Angeles include Boeing Boeing and the pre-Broadway run of Bonnie and Clyde. She has an MFA from the FSU/Asolo Conservatory and is reigning champion of LA’s Manhattan Monologue Slam.

Patrick Zeller holds both a BFA (Emerson College) and an MFA (University of San Diego/Old Globe Theatre) in Acting. He has appeared in national TV spots, on network television, in several prize-winning indie films and the feature No Reservationswith Catherine Zeta-Jones, directed by Scott Hicks. He recently starred in Say Yes, with Alexandra Brown and Shari Belafonte, due in theatres next year.

He's young, he's broke, his landlord's knocking at the door, and he's just found out his wife is going to have a baby. To make matters even more desperate, Casey is fired from his gig as an Elvis impersonator in a run-down, small-town Florida bar. When the bar owner brings in a B-level drag show to replace his act, Casey finds that he has a whole lot to learn about show business and himself.

Kickoff Pride Weekend the Right Way with a 5K! Presented by the Palm Springs Front Runners and Walkers and this year benefiting The LGBT Community Center of the Desert, The Pride Run & Walk 5K in Palm Springs, California hits the streets of Old Las Palmas Saturday, November 4, 2017. (This event is not pet friendly and strollers are not allowed on the course.)

Are you ready, sweaty and excited to GO COMMANDO in Palm Springs? Palm Springs Leather Pride is ready for you and can’t wait! ​

Their official word is, "First, we want to thank everyone who made last year's Palm Springs Leather Pride Weekend an amazing experience in leather, kink, gear and fetish. In particular, we want to thank the countless volunteers and attendees whose support made for a 35% increase in attendance adding up to a hot and sweaty event and record-setting contributions to our beneficiaries.

​This year I’m excited to announce an even greater and sweatier effort on our part to produce the best attended and action-packed weekend yet. As contest chair I can tell you I am putting together a contest like no other that for the very first time in contest history that will include attendee participation in to name Mr. Palm Springs Leather 2018. We welcome back our longtime emcee Lenny Broberg and pair him with Los Angeles’s Jeremy Ronceros for what’s sure to be a weekend of entertainment and surprises. The Palm Springs Air Museum is in the process of constructing a new hangar and plane gallery which will also be the venue for our contest."  More Info

Get Ready to Celebrate Halloween on Arenas Road

Enjoy our official GayDesertGuide.com "Mirror Me" photo booth BETWEEN 5 and 7 PM.  We'll be set up by Blackbook Bar where you can have your photo taken to share on social media using the #ILoveGayPalmSprings hashtag. We'll give you a copy!

One of the most prolific dance artists of our time and Billboard® Dance Chart Topper Robin S known for her mega hits "Show Me Love" and "Luv 4 Luv" will headline Halloween Palm Springs on Arenas Road.  Identical twin brothers – The Perry Twins notorious for spinning at festivals around-the-world (Burning Man, Ascension Fire Island, White Party Bangkok and Madrid's Infinita Pride) will also take-to-the-stage along with the ever vivacious Pepper MaShay known for her international hits "Dive in the Pool" and "Does Your Mother Know."

Halloween Palm Springs is FREE with a suggestion donation of $5 being accepted at each of the entrances benefiting Desert AIDS Project, Palm Springs Gay Men's Chorus, Greater Palm Springs Pride (An Official Pride Event) and LGBT Community Center of the Desert.

NEW THIS YEAR…TWO VIP AREAS: Ketel One Lounge for only $50 and VIP All Access/Meet and Greet for only $75. To purchase tickets online for a limited time click here.

Performances will include:  KEISHA D, DJ COREY D, CHI ENERGY AS EDWARD SCISSOHANDS and the effervescent Bella da Ball as Master of Ceremonies.

Registration for the Costume Contest begins at 6:00 PM at the Palm Springs Gay Men's Chorus booth on Arenas Road and will end promptly at 7:45 PM. Registered participants must be in line with their wristband on at the main stage no later that 8:00 PM. Over $1,000 will be given away in prizes.

"Visitors will be attending the Arenas Road Halloween Party from all over the world as we have been receiving e-mails from as far away as Berlin, Cape Town and Sydney…It will truly be an international experience. Our team of professionals including associate producer, Toby Willaby is prepared to excite, entertain and showcase to the world, that Palm Springs is THE party destination," said Jeff Hocker, Executive Producer, Halloween Palm Springs.
Halloween Carnivale 2017 with Halloween on Arenas Road  More Info

Explain organizers, "This inaugural season we have received over 2700 unique film entries from 103 countries. Each year our team of jurors work to select 250+ titles from shorts to features that showcase the breadth of the art form. We hold our judging to nine cinematic virtues: storytelling, humor, heart, ideas, originality, visual interest, craftsmanship, diversity, and gut-level viewing pleasure.

We're proud to be featuring award winning films from Cannes, Annecy, Tribeca and Sundance with Oscar and Grammy artists and producers in a variety of styles from 2D, 3D, Hand Drawn, Water Color, Oil Painted, VFX & Rotoscoping, Experimental, Sand, Paper, Anime, and Stop-Motion. We will be featuring film for All Ages in a variety of genres from Drama, Comedy, Sci-Fi,  Fantasy, Horror and Abstract.

The festival experience is about more than just watching film after film. During intermissions, or at the after-parties, strike up a conversation about what you’ve just seen. Review the show with your date, pointing out personal favorites in the program. Ask one of the animators about what went into creating their project. Join the animation tribe, trading tips about local job opportunities. At its heart, the festival is a family reunion for animation-lovers.

Whether you’ve been attending since year one, or whether you’re discovering indie animation for the first time… The magic ingredient that turns films into a festival is you. We’re here together to celebrate creativity of these artists who have worked so hard to transform their daydreams into a fantasy reality and appreciate how much love has been poured into these projects.  More Info

Palm Springs hottest weekend parties just got HOTTER! Toucans Tiki lounge will be bringing the heat to you all weekend long with Babes and Scares on Friday night and The Creephouse Costume contest with Vanity Halston on Saturday night. Sunday night will continue the Halloween festivities with Tommi Rose & The Playgirls Halloween show, where you can catch GayDesertGuide in the house, so be sure to stop by and say hi! The weekend is sure to be filled with drink specials, giveaways and your all your favorite ghouls and gals! Be sure to hashtag #ILoveGayPalmSprings in all your photos!

more low key (just a tad!) then head over to Streetbar for Andy & Nathan on Saturday, October 28th! They’ve got two shows, 4 and 8pm. And you can indulge in top shelf drink specials while you’re there too! Drink specials are available all weekend long from Tito's gluten free vodka to Patron silver Tequila. They really do have it all!

Top Five Bookmarks of the Week

Compiled from a variety of sources by Nicholas Snow