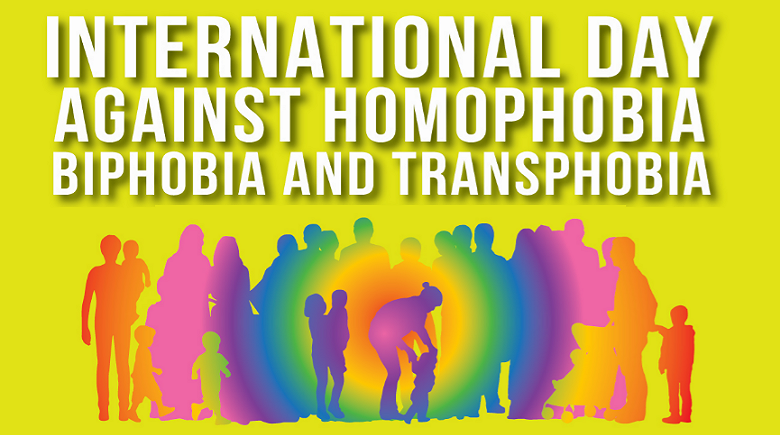 "It was created in 2004 to draw the attention of policymakers, opinion leaders, social movements, the public and the media to the violence and discrimination experienced by LGBTI people internationally," explains the "About" section of dayagainsthomophopia.org.  "In under a decade, May 17 has established itself the single most important date for LGBTI communities to mobilize on a worldwide scale.

The Day represents an annual landmark to draw the attention of decision makers, the media, the public, opinion leaders and local authorities to the alarming situation faced by lesbian, gay, bisexuals, transgender and intersex people and all those who do not conform to majority sexual and gender norms.

May 17 is now celebrated in more than 130 countries, including 37 where same-sex acts are illegal, with 1600 events reported from 1280 organizations in 2014. These mobilisations unite millions of people in support of the recognition of human rights for all, irrespective of sexual orientation or gender identity or expression.

The International Day Against Homophobia, Transphobia and Biphobia is not one centralised campaign; rather it is a moment that everyone can take advantage of to take action.

The date of May 17th was specifically chosen to commemorate the World Health Organization’s decision in 1990 to declassify homosexuality as a mental disorder.

The International Day against Homophobia, Transphobia and Biphobia has received official recognition from several States, international institutions as the European Parliament, and by countless local authorities. Most United Nations agencies also mark the Day with specific events."  LEARN MORE

As the first Native American Museum to be part of the Smithsonian Institution's Affiliate Program, the Agua Caliente Cultural Museum is excited to continue its legacy by announcing inclusion in International Museum Day on May 18th, 2017 with a special open house from 6:00 – 8:00 PM.

Executive Director, Julia Bussinger announced, "Agua Caliente Cultural Museum will join the museum community around the globe to become a hub for promoting peaceful relationships among people, encouraging them to engage in a continuing dialogue about challenge, culture, and identity. International Council of Museums (ICOM) established International Museum Day in 1977 to increase public awareness of the role of museums in the development of our society."  MORE INFO

Look for the GayDesertGuide.com booth and pick up the latest map and guide for the summer as you join 500+ Valley Chamber Members and enjoy delicious complimentary food and beverages from some of your favorite places. Great raffles with fun prizes.  MORE INFO

Harvey Milk certainly never sold out, having given his life for our movement, but the breakfast in his honor has!  Nicholas Snow dropped in on the committee's final meeting to get a rundown of the event.

The breakfast will honor the memory of Harvey Milk, an American hero, and strengthen coalitions among the many diverse community organizations that support justice and equality for all individuals. More than 900 diverse Coachella Valley residents wil celebrate the memory of this influential civil rights activist. MORE INFO

So Many Reasons to Proclaim: #ILoveGayPalmSprings

To stay informed, we encourage you to sign up for our Oasis Insiders weekly newsletter. We call it “This Weekend in #ILoveGay Palm Springs” and keep you up to date with the weekend’s events, plus special offers to our members.

Compiled from a variety of sources by Nicholas Snow

Historic O’Donnell House Will be the Site of Sizzling Benefit