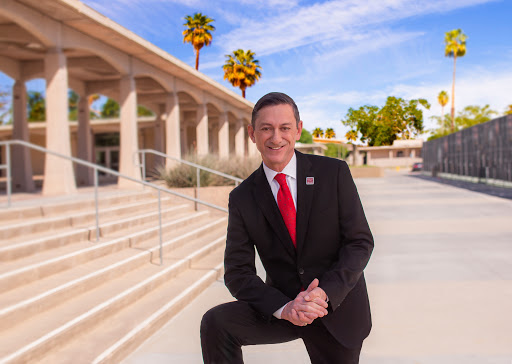 Joel L. Kinnamon, Ed.D. has announced his retirement as College of the Desert Superintendent/President effective March 31, 2021. He joined the college as its seventh president in July 2012.

“My years working here as part of the Coachella Valley’s community college have been the honor and privilege of a lifetime,” Kinnamon stated.  “The decision to retire was difficult as I have served in multiple community college systems for more than 30 years. However, over the past few years I have also been tending to the needs of ailing parents with debilitating conditions. The prudent decision at this time became more evident to lessen my professional demands and place them towards my family.”

During Kinnamon’s tenure, College of the Desert (COD) has worked to steadily and significantly increase student access to a higher education while expanding access to academic programs, facilities and services across the Coachella Valley. Student full-time enrollment has increased by fifty-percent, ranking College of the Desert as high as number one out of the 116 California community colleges in the state earning the characterization “one of the fastest growing colleges in the State.”  The college has also celebrated record-breaking graduation rates for the sixth year in a row while transfers to the UC and CSU systems have continued to grow exponentially.

“Joel has been an incredible asset to our college and the community we serve. His broad experience, innovative ideas and visionary leadership have strengthened the college, increased its impact and expanded its reach,” Board of Trustees Chair Dr. Fred E. Jandt stated. “There is no doubt the college is stronger and better prepared for the future because of his care.”

Dr. Kinnamon’s tenure has been marked by significant growth and expansion, including the opening and enlargement of satellite campuses in Indio, Mecca and Desert Hot Springs and the transformation and restoration of the Palm Desert campus. Development of a new west valley campus in Palm Springs is currently underway and construction is expected to begin soon to double the size of the Indio campus.

“I am proud of our collective efforts that have improved student success outcomes based on our national award-winning academic programs,” Kinnamon said. “I’m thankful for unwavering support from the community which has allowed us to expand while strengthening our financial stability even during a global pandemic. It gives me great satisfaction to hand the leadership of the college over to the next Superintendent/President on such strong and stable footing.”

Information regarding plans for transition and a search for replacement will be shared as it becomes available.

Among the largest employers in the valley, COD is an anchor institution that generates more than $300 million in economic impact annually. The College has consistently ranked among the fastest growing community colleges in the state and nation, celebrating its largest graduating class in history each of the last six years.

Palm Springs Continues to Experience Renaissance Even in Pandemic

Kate Ullman says, “PS I love you because…”