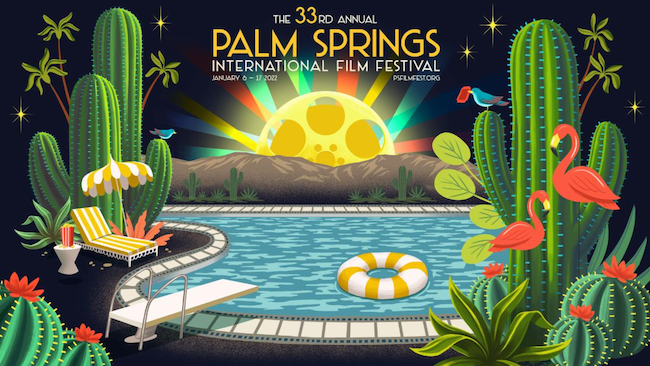 Based on the current rise of COVID cases, the Palm Springs International Film Society has

Based on the current rise of COVID cases, the Palm Springs International Film Society has announced that the Film Festival will not take place this year from January 7-17. This follows the cancellation of the January 6 Film Awards. After thoughtful consideration, the Film Society feels this is the most responsible decision to ensure the safety of our patrons, filmmakers, and staff. Those who have purchased festival tickets and passes will receive a refund.  For most, the refund will be returned to their original method of payment

The Film Awards Gala will take place on January 6 at the Palm Springs Convention Center, with film screenings beginning Friday, January 7 including the Opening Night presentation that evening and will conclude with Best of Fest on January 17.

Film Award Gala seats and tables and Festival passes are currently on sale.

To purchase tickets to the Film Award Gala click here.

The 2022 Palm Springs International Film Festival will require all attendees (pass holders and ticket holders), volunteers, staff, guests, sponsors, media, and vendors to show valid proof of full vaccination in order to enter Festival venues and events. To keep all patrons as safe as possible, no exceptions to this policy will be allowed.

For the Film Festival, each person attending will be required to show their vaccination card and photo ID in person and sign a waiver. The person will then be issued a wristband, which will need to be worn for the duration of the festival visit.   If the band is removed or lost, they will need to go through the process again. Specific details on safety are available here.

The Palm Springs International Film Festival (PSIFF) is one of the largest film festivals in North America, welcoming 136,000 attendees last year for its lineup of new and celebrated international features and documentaries. The Festival is also known for its annual Film Awards Gala, a glamorous, black-tie event attended by 2,500.

Poignant, heartfelt and insightful stories from the LGBTQ community.

In this astonishing and long-buried story, Dickson Hughes and Richard Stapley, two young songwriters (and closeted lovers), were hired by screen icon Gloria Swanson to write a musical version of Sunset Boulevard. When Gloria fell for the handsome Stapley, life began to imitate art, with disastrous and far-reaching repercussions.

Convinced she’s about to have the worst week of her life while on holiday with her gratingly upbeat and “normal” family, socially awkward misfit teen AJ (Nell Barlow) unexpectedly falls head over heels for a dreamy, flirtatious lifeguard named Isla.

Love, Spells and All That (Turkey/Germany), Director Ümit Ünal

Two women who were teenage lovers separated by their parents reunite after 20 years. The cosmopolitan Eren returns to her childhood island in Turkey determined to rekindle her great passion for working-class, superstitious Reyhan in this one-of-a-kind love story that casts a magical spell.

In this tale of love, identity and the pursuit of happiness, a city-dwelling sex worker returns home to the family he supports, only to be met with homophobic disdain, and encounters a young local he reluctantly welcomes into the business.

Vivian Kleiman’s award-winning and lighthearted documentary looks back on the birth and evolution of queer comics, reflecting on the impact of representation in the art form, from the early days of subversive works to the mainstream success of Alison Bechdel’s Fun Home

Erez is a gay swimmer competing for a spot in the Israeli Olympics at a desert training camp where he must deal with the homophobia of the athletic world and his hidden desire for his rival, Nevo. But showing his true feelings could prove dangerous.

When trans teen Valentina moves from the city to a small, conservative town, the community quickly sets up roadblocks to her happiness, forcing the shy teen to stand her ground in this inspiring and hopeful story of gender expression and solidarity.