​GRAND PRIZE ~ The Grand Prize for each tournament is a minimum of $200 cash prize and the opportunity to be a guest star in a future cabaret show at Runway.

GONG SHOW KARAOKE: KARAOKE LIKE YOU’VE NEVER SEEN IT BEFORE! 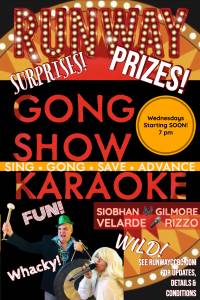