Due to the coronavirus this event is being canceled through March. THE ADVOCATE calls ELECTRICITY the rave reviewed hit LGBT comedy / drama "The Hottest Play in Palm

For all info and tickets: www.ElectricityThePlay.com "Flawless romantic performances in a gay comedy gem... A resplendent mix of hilarity and tender emotions... Comic timing that sparkles... A gay love story that endears, delights, and will surely endure as an important play about being gay in our turbulent times." --John Townsend, LAVENDER MAGAZINE "Sexually charged... The thrill of voyeurism thrives... A riveting delight to watch... Truly enveloping and hypnotic experience" --Genna Rivieccio, THE PRIDE "ELECTRICITY is shockingly good... ​The show is expertly executed... Witty, bitchy, at times gritty and moving, the show hits all the right notes, delivering the perfect combination of sweet, sexy, uproarious, and at times, sad. But like any memorable love story, it all ends up going right to the heart." --Winston Gieseke, PALM SPRINGS LIFE

In addition to playing every Tuesdays at Oscar's  Electricity will be playing at the Inndulge Gay Resort Hotel monthly: 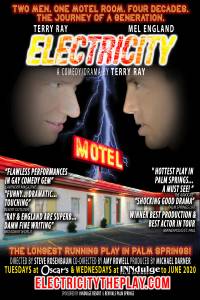