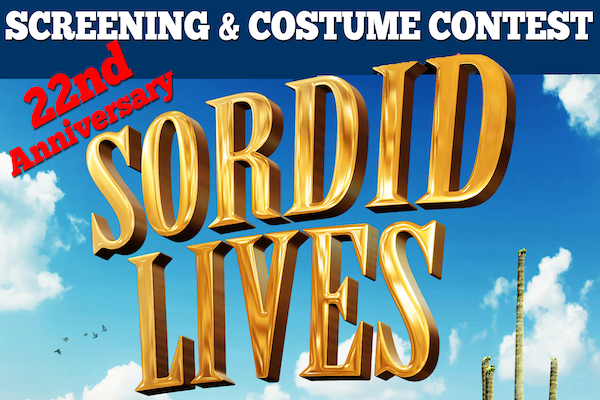 The Del Shores Foundation presents a one-night-only 22nd anniversary benefit screening of the original SORDID LIVES film where it all began at the Camelot Theatres at the Palm Springs Cultural Center on Saturday, October 29 at 7:30pm. The evening will be hosted by creator DEL SHORES and Del Shores Foundation Program Director EMERSON COLLINS with appearances by original film cast members ROSEMARY ALEXANDER, NEWELL ALEXANDER and ANN WALKER.  The evening will open with a Sordid Lives Costume Contest with prizes for the top three costumes, followed by the screening.

AND, IT'S A COSTUME CONTEST!! Come as your favorite Sordid character - fan fav or deep cut from the series or sequel. (That extra outside the Corner Stop in A Very Sordid Wedding looked awfully familiar.) With a fun bunch of Sordid collectibles for the top 3 costumes! (You don't have to dress up - but it'll be fun!)

All proceeds from the evening will benefit the Del Shores Foundation and its mission to find and elevate new LGBTQ+ writers living in the South. This year the Del Shores Foundation completed its first Writers Search and awarded over $20,000 in cash awards and production grants. The Foundation hosted the first Del Shores Foundation Writers Festival in Dallas in September. The Writers Festival brought in twelve LGBTQ+ winners and finalists from the Writers Search for a weekend of private workshops, public panels and stage readings of all three winning scripts.  Screenplay winners Serayah Silver and Monet Noelle Marshall will be in attendance at the screening.

VIP Tickets are available and include 6:15pm meet and mingle, appetizers and first drink free with Del, Emerson and the cast in the upstairs lounge at the Palm Springs Cultural Center.

GENERAL ADMISSION TICKETS are $32.09 for the screening and costume contest.

VIP TICKETS are $132.09 and include the 6:15pm meet and mingle, fried chicken and mashed potatoes, and first drink free.