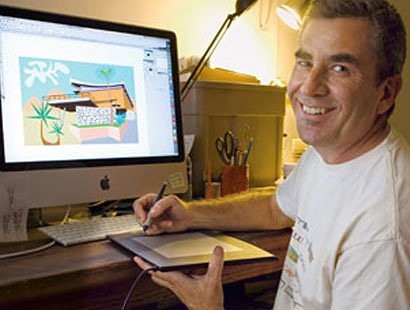 Nat Reed is a Los Angeles artist recognized internationally for his unique interpretations of the “Familiar Modern”. Reed began showing the current body of work in galleries in 2009 introduced with the show Tikirama. He later opened the solo exhibition “Torodoodle” at MModern Gallery in Palm Springs and exhibits at Harold Golan Gallery in Miami. Reed was chosen to create a large-scale wall mural for the Peterson Automotive Museum's Fantasies in Fiberglass exhibition in 2010. His artwork quickly became a favorite for collectors and fans of mid-mod inspired art and design. He has also shown at Mod Miami, LA Modernism, Palm Springs Modernism, The Hukilau and Mondo Lounge in Las Vegas. Reed has been a featured artist in the Los Angeles Times, California Modern Magazine and the Australian “kustom kulture” magazine, Deadbeat. His most current show Post-Fabricated, Re imagining the already” was a highlight of Modernism Week in Palm Springs and gave collectors the opportunity to experience the dramatic arc of visual and conceptual development the artist has rapidly accrued to this work.