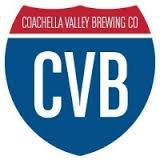 Locally owned and operated in Thousand Palms, California, we are committed to crafting beer that showcases the agriculture and the attitudes of the desert.

Coachella Valley Brewing Co master brewer Chris is a graduate of The University of Alaska Anchorage Culinary Arts program and holds an Associates Degree in Culinary Arts, Certified Dietary Manager with over 20+ years of management experience. Chris currently holds the rank of National level judge and is working towards master. Chris was formerly a brewer at Midnight Sun Brewing Co. and The Moose’s Tooth Brewing Co. both in Anchorage, AK and assisted the head brewer in every aspect of brew house operations.  Chris won 1st Place at The Great Alaskan Beer and Barleywine festival in 2000 and Gold at the Toronado Barley Wine Festival the same year while brewing at Midnight Sun. In 2001, M.S.B.C. was awarded a 1st place in the Alpha King Challenge a competition of the most balanced hoppiest beers in the world.